#3 | An Insight into Headspun's Synthwave OST

Complementing Headspun's themes and world design is an original soundtrack to gel everything together and create a unique atmosphere. Cortex is brought to life with a synthwave soundtrack composed by Soho Loop - a synth outfit from Birmingham UK.

Here's Soho Loop's Steve Willey with an in depth insight into the game's soundtrack.

"When I was first approached about the soundtrack, the early artwork and conversations showed that the game needed to take on a neon and synth vibe. Jamin had been working with placeholder Synthwave tracks in development and it was clearly well suited to the game. Early discussions centred around tracks from the likes of Magic Sword, Carpenter Brut and Meteor and how they could work in this world. Certain aspects of this genre grabbed me immediately – the epic and space fuelled synth pads and the catchy nature of the synth lead riffs are obvious features of the style but I started to connect them with particular aspects of the narrative.

The epic space-fuelled synths were perfect for exploring the confusion that Theo/Ted are suddenly confronted with. This also opened up further influences from other producers such as Eno and perhaps more traditional spatial composers, who use the movement of sound in larger spaces that produce the feeling of an almost outer body experience (An Ending by Eno is perhaps a good example of this). Whilst you play the character of Ted within the Cortex, you still want to feel some connection with Theo so this idea of an outer body experience was prevalent whilst working on ideas.. 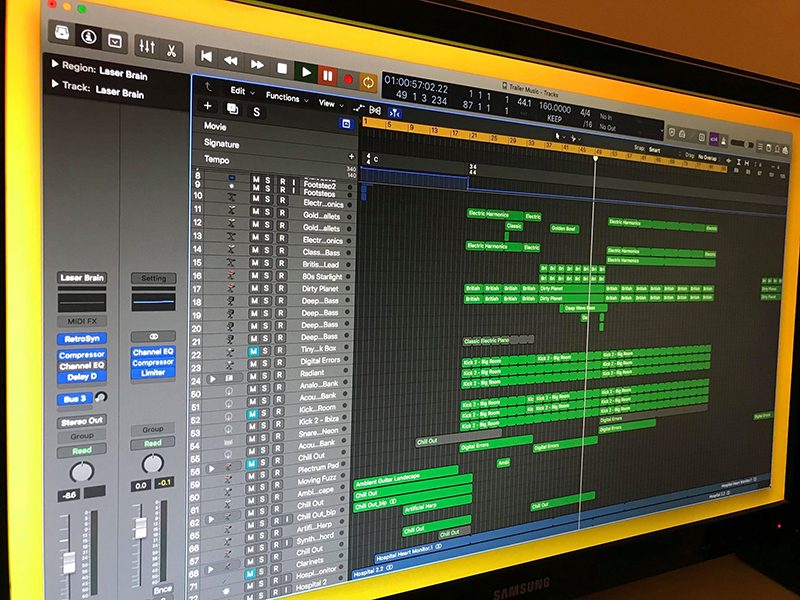 The Synthwave elements connect with the art style and ensure a cohesive world is created however it’s through the merging of other genres such as Hip Hop, elements of funk and perhaps more jazz fuelled elements at times that solidify and additional depth and individual identity for the world within the game. The trippy and irregular Hip Hop beats have enabled us to introduce an unsettled environment. We can then heighten or lower the tension through the irregularity in the music. This can be heard in the Overworld theme (Clip on Soundcloud). This approach has proved to be something that is continually developed throughout the game and allows us to plan for how the music heightens the narrative throughout the game, not just from track to track.

Relatively early into the project, it became apparent that involving Soho Loop would be of huge benefit to the project. Soho Loop were originally set up to experiment and further develop the musical ideas of both myself and others in the band, that wouldn’t necessarily fit into the standard boxes of the projects we were working on. With a good background in merging the likes of Hip Hop and Synth music, it seemed the ideal pairing. As tracks have been created, it’s been a case of working on them further within the band and looking for more opportunities for organic development. The results have been pretty awesome and we can’t wait to share the final results with everyone."

We'll be putting out the OST alongside the game itself when it launches later this year, and can't wait to share it with you in its entirety.

Until next time, then!

An FMV/Adventure hybrid set in Cortex; the world of the human brain.