Hullo! Thanks to everybody that's taken the time to check out the game so far. We're already hard at work on the fist update, with some substantial updates and additions in the works. We're very aware Early Access isn't best-suited to narrative driven games, but we're really excited to share the world of Headspun with the itch.io community, and to involve you every step of the way as we approach the game's full release next month.

A Game about the Voices in our Heads; Some Context...

In Professor Steve Peters book - The Chimp Paradox - he outlines a metaphor for two voices we all have in our heads: the Human, and the Chimp.

The Human is the rational, conscious voice, and deals with situations in an intelligent and measured manner. The Human is the voice you like to think is in the driving seat of your life.

The Chimp, on the other hand, is the primal, irrational subconscious. It doesn't care for logic or reason, and acts purely on emotion. It's been conditioned over thousands of years to keep you out of harms way - it cares not for society and the modern rules we live by. 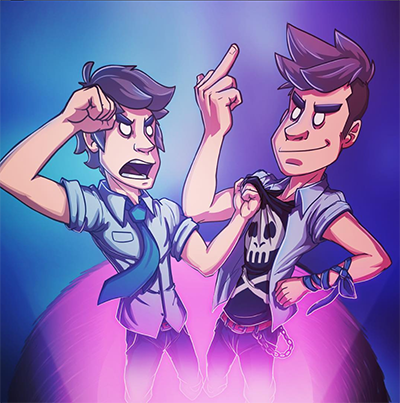 In life, there are often moments where these two voices come into conflict, which can cause stress and turbulence.

Headspun is a game about these voices coming to blows.

An FMV/Adventure hybrid set in the human brain